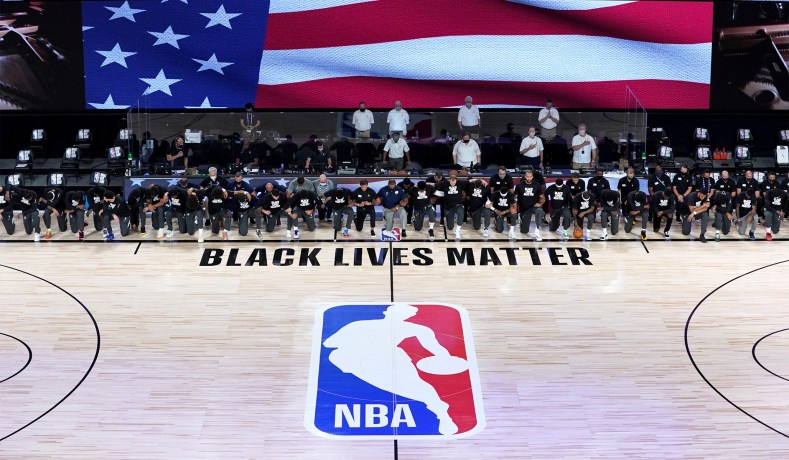 George Floyd. Breonna Taylor. Countless names added every day to the list of the dead. Defund the police. The cries of the Black Lives Matter movement rages on. It has become difficult to stay quiet during this troubling time, but recently in the news, it has fallen silent. No videos of protestors marching through the streets, walls built by policemen and their shields, the violence and the flames, have suddenly dispersed. In reality, the battle rages on for the call to change the systems that have historically reduced the fair treatment and opportunities for Black Americans to thrive. Thus, it is my solemn duty to address these issues in my own realm, sports. I cannot be an advocate for Black Lives Matter efficiently unless I use my platform to speak the words that need to be spoken, and amplify the cries of black athletes that have been ringing. I have interviewed several black athletes and have compiled a series of blogs that attempt to unpack the experience of black athletes in sports. It is time to listen.

Part I: The Experience of Prejudice and Discrimination for Black Athletes

Remember that first day of tryouts? First day of practice? First recruiting trip? The moment you walk onto the main stage before a game? That rush of ecstasy, the tension that runs high, and the sheer excitement. You worked hard for this. You trained as much as you could. You begin to scan the room and look at your competition, sizing them up based on their initial appearance. Have you ever looked at a certain player and thought, “I think I got that one, they aren’t better than me” or even “that must be their best player, I should watch out for them.” Now imagine you are a black athlete walking into these scenarios, do you know what it looks like?

Imagine you are a black athlete walking in, do you see it? The piercing stares, the side conversations, the uneasiness, the utter disturbance of the aura in the room rubs you the wrong way. One’s whole identity, skill level and competence in their sport is tied to their blackness. Emmanuel Calton remembers his time in college athletics playing basketball in a private catholic school where “there was a standard that was different from any other players because I was black. I was expected to be tougher mentally and physically. I was expected to be first in sprints by non-colored teammates ‘because I’m black and I’m supposed to be fast.’”

Even in college athletics, being a female black athlete causes a further divide. Helen Onyenso reflects on her experiences with the athletic director, confused with the fact that the women’s basketball team were not able to play music deemed “inappropriate” for their warm ups prior to game time, while male teams were allowed to do as they please. This double standard divides the experience of black athletes in the category of male and female; men are held to a higher respect while women must still abide by what society deems acceptable for them to perpetuate.

Nevertheless, preconceived notions carry on at an early age; the realization that you are different from the rest of your peers. Michelle DeCoud reflected on her younger school days as she explained that “to others, her athleticism tied to her blackness” as it is assumed all black people should just excel in sports. Microaggressions such as “you should pick this up easily” or “this shouldn’t be a problem for you” further isolates the individual, placing them to a higher standard they never asked for, but society deemed it so. In some cases, a black athlete can be able to be in a supportive environment, but for how long? Kadee Sadilla, a rower, had a difficult time breaking the barrier in a white-dominated sport. She accomplished making a spot on the national rowing team, but at what cost? Placed in the “notoriously racist city” of Charlottesville, Virginia, Kadee had to experience living under the roof of a racist host and no emotional support from her peers; she felt alone and isolated.

In my own experience as an athlete, I too have perpetuated these undeserved assumptions. I always looked at my black teammates as my standard of where I want to be as an athlete, assuming that their athletic abilities came naturally while I had to work tooth and nail to get an inch close to their level. Where did that get me? I was comparing myself to someone who never asked to be profiled in that way. I placed my own expectations onto someone who probably had the whole world looking at them to see if they fit the standard of what a black athlete should be.

In our society, we thrive on the entertainment that black athletes brought us from the NBA to the NFL to the world stage of the Olympics. The excitement, the tenacity, the athleticism, the posters, the media, the fame and yet, did we ever stop and think…they are regular people just like you and me.They are human beings navigating a life where their blackness is defined by the people who will never understand what it is to be black. Thus, I continue my research on the experience of black athletes in sports in order to educate myself and open my eyes. I refuse to “shut up and dribble.” It is time to speak up. Tune in next post for the next question in this series on the pressure of preconceived notions placed by the world of sports and its inhabitants.